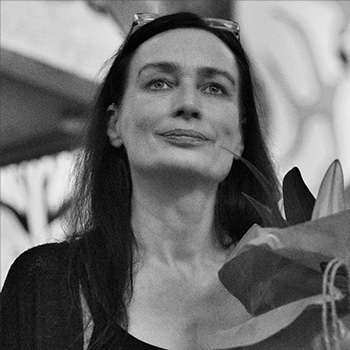 Brigitte Christensen (Rome/Copenhagen, Italy, and Denmark) is a theatre and film actress, stage director and playwright, theatre and film acting teacher. She has received various awards for her acting work, Premio Rosselini amongst others. As a theatre actress, she has confronted the contemporary drama and the great classics (Euripides, Strindberg, Brecht), and is continuously invited to present her own creations and monologues in theatre festivals all over Europe. Brigitte created big theatre plays in unconventional spaces and inside traditional theatre houses, directing performances involving actors, dancers, circus artists and non-professionals all working together. She has developed her own way of involving citizens in creation and acting processes with “Community plays” or “Peoples Theatre” as well as engaging with people from the margins of society, mentally challenged ones, using theatre as therapy and a way of breaking isolation.

Brigitte was one of the creators and artistic directors of the international theatre festival Amandola (Italy 1984-1998). Artistic director of theatre NoDomain (Odense International Music Theatre, 2014-2015). Artistic director at cultural project EUTOPIA of Aarhus – European Capital of Culture 2017. EUTOPIA was part of guiding theme RETHINK of Aarhus 2017 and was based on the dream about creating a centre for new European multicultural popular culture, a place for everybody. A place with space for innovation and experimenting within theatre, music, circus, dance, performance and sports.